Ever look at a salad and wish it was bread? I'm here to save the day with this Garlicky Kale Panzanella Salad! Panzanella is a bread salad basically! Bread soaked with oil and vinegar dressing that is....

Marinated tomatoes and onions as well as kale top this French bread beauty! I mean it is a salad after all...we do have to include a few vegetables!

Panzanella salad is a delicious way to serve up something different at the dinner table that doesn't lack in flavor OR texture PLUS its salad...Let's start with the base of this salad first!

The main component of any good panzanella salad is deliciously crispy French bread. For this garlicky kale panzanella we are making our own toasty bread!

To really emphasize the garlic-y flavor in this dish, I also broke up a whole head of garlic and placed cloves all throughout the bread on the baking sheet and let it roast. My house smelled amazing!

The other ingredients that make up the salad are usually some combination of tomato, onion, and cucumber! You could even throw some olives on their and it would be delicious.

After the bread is toasted we'll add our fresh veggies on top!

In addition to our fresh veggies, we'll make a homemade vinaigrette to soak the whole salad!

That's the best part of the panzanella experience, it's like the perfect bite of dunking bread into oil + vinegar plus the freshness of the tomato and onion.

The dressing for this particular garlicky kale panzanella salad is a classic balsamic vinegar dressing!

This gets poured over the whole salad and tossed. Let it sit for about 10 minutes so the bread soaks up all that garlicky goodness. Now it's time to eat! 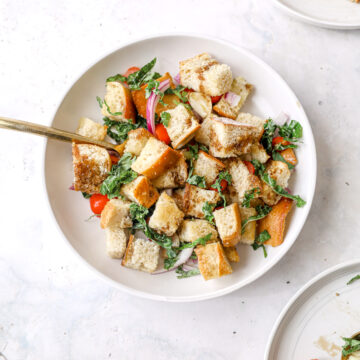