Get ready for fall and cooler weather with this creamy chicken potato soup that’s more like a hearty chowder—true comfort food!

It's creamy, hearty, healthy, and feeds a crowd. The best part is that it's wrapped up in 30 minutes! What's not to love about that?!

Chicken potato chowder might not be one of the most common soups, but when I came across a unique chicken soup in an old recipe book, I knew I needed to put my spin on it!

This chicken and potato soup recipe is loaded with shredded chicken, warm spices, and TONS of vegetables. It was toddler and husband approved...here's what you'll need:

So the original recipe I based this on calls to boil a whole chicken. Who has time for that? While delicious, it's time-consuming and you can just use a shredded rotisserie chicken and chicken broth.

The next ingredient that's super important to this recipe is potatoes of course! I choose to leave the skin on my potatoes because it adds extra nutrients and once simmered, totally edible!

The spices in this soup are really what makes it stand out! Cinnamon is the unique ingredient I love adding to vegetable soups to make them unique.

Cinnamon is a common ingredient to add to Lebanese cooking, which is one of my favorites. It adds a twist that will have people begging for this recipe!

Typically your "healthy" soups don't necessarily have a creamy soup base. This one has exactly one cup of sour cream added that when mixed with the chicken broth, potatoes, and tons of veggies creates a creamy base for this soup that isn't too rich, but brings a "tang" to the pot that you absolutely need.

Are Certain Types of Potatoes Better Than Others for This Recipe?

For this recipe, I used Idaho potatoes because they are really hearty and hold up nicely after being simmered in the soup.

If you use a "softer" potato, such as baby red or new potatoes, they may not hold up as well but that is totally a personal preference!

Chicken potato chowder really couldn't be easier to make! It's a one-pot dinner that develops flavor really quickly. So 30 minutes is all it takes for this healthy family dinner.

So just a few steps will get you from just a handful of ingredients to a hearty dinner!

Into the Instant Pot? You can totally do that too! Instant pot chicken soup with potatoes is probably the fastest way to enjoy this soup. *For this version you'll use 3 raw chicken breasts instead of already cooked chicken*

It’s actually really easy to chook chicken potato soup in an instant pot! So let me know what you think if you give it a try.

What to Serve with Chicken and Potato Chowder

This is a spicy chicken potato soup, so something fresh and cool to balance it out would be perfect!

Or, if you want to create a totally decadent dinner how about side dishes like:

I love the hearty combo of chicken and potatoes, but when it comes to soup, it’s hard to choose a favorite! Check out these amazing soup recipes: 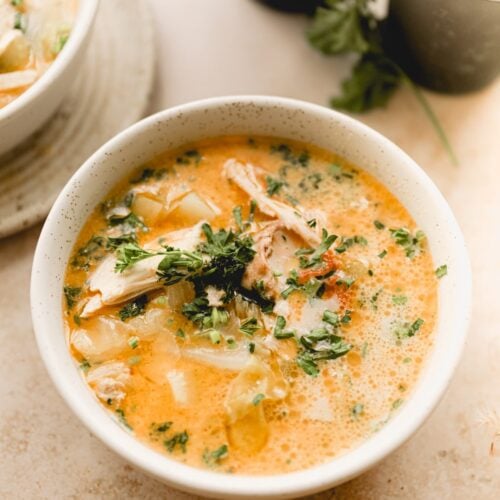