I really should call this recipe "Mom's Potato Soup" because she's made it for years! This Velveeta Potato Soup has seen me through some of the coldest Kansas winters and been delivered to LOTS of friends for emotional support.

This is the best emotional support soup! Ha! If you show up with a piping hot bowl of this soup to a sick friend or a new mama I promise it'll be a hit.

How To Make Potato Soup with Velveeta

It simply starts with potatoes! Chop up your potatoes and boil until tender.

The cheesy goodness gets added in after the potatoes are completely cooked through and velveeta cheese and cream of chicken soup combine to make the heartiest soup ever!

Do I Have To Peel The Potatoes?

I actually don't peel them for this recipe. But if you have an aversion to leaving the skin on, by all means peel them!

Can I Use A Crock Pot?

YES! You can definitely dump everything in a crock pot, minus the velveeta cheese, and let that go on low for 6-8 hours.

At the end, simply cut the velveeta into chunks and place them on top. Cover and allow them to melt. Stir the soup up and serve!

How To Store Velveeta Potato Soup

This soup stores well in an airtight container in the refrigerator for 1 week.

It also freezes VERY well! Making it perfect to make ahead of time and take out portions as needed.

What Do You Serve with Potato Soup?

In my opinion there is nothing better than dunking fresh toast into soup!

You could serve this in a sourdough bread bowl or with a slice of sourdough toast.

A huge salad would also be delicious next to this soup! Try salads such as Apple Crunch Salad or Peach Proscuitto Salad

Love this recipe? Check out these hearty soup recipes... 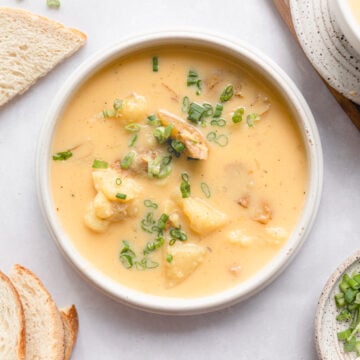