My ridiculously simple Sesame Seared Ahi Tuna recipe looks and tastes super impressive, but is a snap to make. Made with just 10 easy-to-find ingredients and just 10 minutes of active cooking time, this showstopping seafood main is easy enough for even the busiest weeknights.

What Is Ahi Tuna?

Ahi is the Hawaiian name for two types of large, tropical, sea-dwelling fish — yellowfin tuna and bigeye tuna. While smaller catches can weigh in at just 3 pounds, the larger catches can surpass 300!  I tend to prefer the slightly milder flavor and firmer texture of yellowfin, but both are quite delicious.

Either variety you choose, you can expect a meaty fish with a pink to dark red hue and a mild, buttery flavor that makes it perfect for searing, grilling, or eating raw as poke, sashimi, nigiri, or maki. Also, please note that both types of ahi are typically less expensive than bluefin tuna, but bluefin can be used interchangeably in this recipe.

Why This Meal Is The Best

Whenever I go out to eat, it seems that there’s some kind of ahi on the menu. Whether it’s a seared tuna salad, sesame crusted tuna, or a pan-seared tuna steak, one thing remains the same: I’m probably going to order it. Why? Because it’s an excellent source of protein that’s almost inevitably going to be delicious!

The only bummer about eating seared ahi tuna recipes prepared at restaurants is that they’re EXPENSIVE. Who wants to pay $20 for a salad? Not this gal! Luckily, I’ve cracked the code on how to perfectly prepare tuna steaks at home for a mere fraction of what you’d pay to eat out.

Cooking ahi tuna is way simpler than you might expect. In fact, this seared tuna recipe:

As promised, you don’t need much to make this beautiful ahi tuna steak recipe. Here’s what to gather:

I told you this was an easy recipe, so rest assured you only need a few basic pieces of equipment:

How To Make This Seared Tuna Steak Recipe

I’m thoroughly convinced that this is the best way to cook tuna steaks. It’s seriously SO easy! Here’s how it’s done:

Step 1: Make Marinade. In a small bowl combine all marinade ingredients and whisk to combine.

Step 2: Marinate. Place your tuna steaks in a shallow dish and pour the marinade over them. Cover and let sit in the refrigerator for 3-6 hours. If you have the time, I suggest leaving them in the full 6 hours for the best flavor.

Step 3: Heat Oil. Get your oil screaming hot in a cast iron pan over high heat. I use a dutch oven because the sides are tall and there is less splatter.

Step 4: Sear. When the pan is scorching hot and the oil is nearly smoking, lay one tuna steak down in the oil. Cook for 45 seconds to 1 minute depending on the level of rareness you like. Flip to the other side and cook for an additional 45 seconds to 1 minute. Remove from pan and lay on a cutting board to rest for 5 minutes. Repeat with the second tuna steak.

Step 5: Slice. After the tuna steaks have rested, cut them into thin slices using a serrated knife moving against the grain of the tuna.

Step 6: Plate & Enjoy! Top with sesame seeds, sliced avocado (if you like), then serve.

This seared yellowfin tuna steak recipe is pretty much the bee’s knees, but there’s always room for customizations. Here are a few ideas to get your creative juices flowing:

Is seared tuna still raw? If cooked properly (i.e. over very high heat for no more than a minute per side), then the interior should still be somewhat raw. Overcooking the tuna leads to a dry, gray interior that overshadows the light, mildly sweet flavor of the fish, so do your best to keep it nice and pink in the center.

If you are worried, you can always take the added precaution of purchasing your fish from a reputable fishmonger and requesting “sushi grade” fish. That said, a small risk still exists, so pregnant or breastfeeding women, small children, and the immunocompromised should avoid eating raw tuna.

In addition, you should note that large sport fish like tuna that eat other, smaller fish have a higher mercury content than smaller fish like sardines or oysters. As such, you should limit your intake of tuna to no more than a few times per month.

Is it safe to eat leftovers? If properly refrigerated, seared tuna should keep well for 24 hours.

What is the best type of tuna to use? In terms of flavor, I think bluefin tuna is superior, but it’s not technically ahi and it’s also quite expensive. Next in line would be yellowfin tuna, followed pretty closely by bigeye tuna.

Pro Tip: How to thaw frozen fish - First, remember that since you’re merely searing the tuna steaks, the fish doesn’t need to be fully defrosted all the way through. In fact, having the center be slightly frozen can act as a precaution against overcooking!

If you’re in a rush, keep the tuna steaks wrapped in plastic, place them in a deep bowl, and put them under cool, running water. They should defrost in about 10 minutes. You can also defrost them overnight in the refrigerator.

What To Serve With Seared Tuna

A seared ahi tuna salad is a classic, in my opinion. To make things easy, I’ll often turn to a bag of Your Taylor Farms Asian Salad mix (your guests will never know!) and thinly sliced avocado. Homemade salads work just as well.

This sesame tuna is also excellent served with a side of sticky rice and a simple cucumber salad. Or you can serve it chirashi-style over a bowl of sushi rice and top it with some pickled ginger, avocado, and sunomono for a hearty feast.

If you’d like to eat this as more of an appetizer, try plating it on a long rectangular plate and top it with ponzu or some extra marinade for a homemade take on tuna tataki.

Finally, try making it into a fusion dish by using it in my simple tuna taco recipe!

If you tried this recipe for my Sesame Seared Ahi Tuna, please be sure to let me know how it turned out by rating and reviewing it below. You can also always tag me in your social media posts — I love seeing your creations and cheering you on! 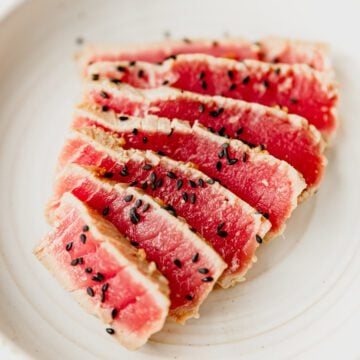 This is also delicious with siracha mayo and a cabbage slaw.