What happens when you take a classic cornbread recipe and mix it with sweet apples and fragrant cinnamon? A mouthwatering upgrade on a traditional favorite that’s perfect for fall (or year-round in our house!).

Other Ingredients and Tips

How to Make Apple Cinnamon Cornbread Perfectly Every Time

With an pre-packaged mix, it's truly easy to get this cornbread recipe right every time.

It’s so delicious, I just might refer to it as apple cornbread cake! Especially with the added sweetness of apples. It really doesn't get much better.

How to Easily Convert Into Apple Cornbread Muffins

Any cornbread muffin mix can easily be converted into Apple Cinnamon Cornbread!

Another brand I've used before is Trader Joes cornbread. It has chunks of real corn kernels in it for another unique texture and added sweetness.

Peeled and chopped apples tossed with cinnamon is simply mixed in to the cornbread mixture to create a unique twist on classic cornbread recipes.

What To Serve With Apple Cornbread Muffins

I actually loved these with a delicious, homemade compound butter! A spicy, sweet honey butter whipped to perfection and spread all over the muffins is delightful.

Combine room temperature butter, honey, and red pepper flakes and whip together with a hand mixer.

Use immediately on Apple Cornbread Muffins! 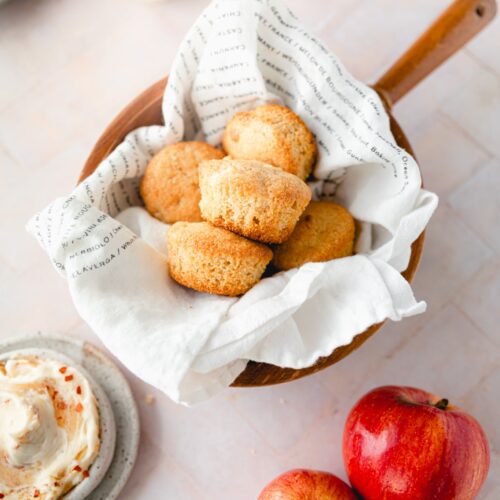 This cornbread with apple and cinnamon was a delicious surprise. Just the right amount of sweet and oh so moist. It comes together quickly with the help of a Jiffy corn muffin mix and pairs perfectly with many meals.
4.58 from 7 votes
Print Pin Rate
Course: Sides and Shareables
Cuisine: American
Keyword: apple, cinnamon, cornbread
Prep Time: 5 mins
20 mins
Author: Sara Ayesh