One of my top recipes is my Seared Ahi Tuna - if you haven't tried it I highly suggest it! It's the base of this new recipe, Ahi Tuna Tacos!

Light, fresh, healthy, and perfect for any time of year. These ahi tuna tacos are so simple but definitely feel like a special treat. So let's cook!

My marinated tuna recipe is incredibly simple. I like to start with a base of soy sauce and lemon juice to really bring the flavor.

Then add in salt as well as a heaping tablespoon of Everything But The Bagel Seasoning. yep! You read that right. It has onion, garlic, sesame seeds and more. All are perfect for this tuna and it adds texture!

Finish that off with little drizzle of honey and it's a perfectly balanced marinade!

It also doesn't get soggy too quickly with everything sitting in it while you eat!

How To Slice Ahi Tuna

The best way to slice the tuna steaks for this ahi tuna taco recipe is to cut it against the grain into slices, then again the opposite way to create cubes.

OR you could definitely leave it in slices for your tacos. I like the cubes because you get a good piece in each bite

If you want to know in detail how to make this marinated tuna from start to finish you'll want to check out my Seared Ahi Tuna recipe. It perfectly outlines it all.

But simply I sear mine in a cast iron skillet with coconut oil. Coconut oil has a high smoke temperature and won't burn at the high searing temperature you need to cook the tuna. 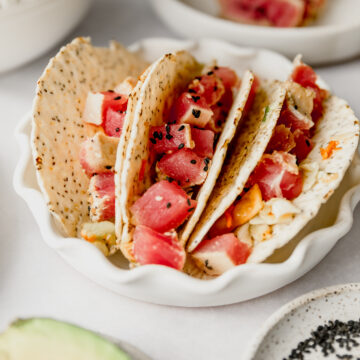