If you are needing something a bit cozy, a bit decadent, and LOT of flavors then this Potato Beer Cheese Soup Recipe is just for you. We all love a good beer cheese appetizer, but why stop there?

I thinned out a traditional beer cheese dip with extra stock and added some chunks of potato and we have a soup, people! It's creamy and cheesy with a slight taste of your favorite beer.

So, What Is Beer Cheese?

Beer cheese is essentially made by creating a béchamel or a cheese sauce using butter, flour, and milk. We are using stock instead of milk and stirring in 3 types of cheese!

It is usually served as an appetizer with soft, warm pretzels and it truly is one of my favorite apps to order!

What Beer To Use?

Honestly pick on that you like. I chose Fat Tire because it's not too heavy and not too light. The flavor was just beer-y (a word?) enough to taste but not over power the whole soup. It's an amber ale and is great for drinking WITH the soup too!

Feel free to use a more robust flavor though if you are up for it! Wheat beer or pale ale will be the most mellow and in my opinion the best option!

What Type Of Cheese To Use In Beer Cheese?

It is very important to use blocks of cheese and shred them yourself because the pre-shredded cheese has some preservatives in it that will keep it from melting down into a perfect soup.

You will be disappointed if you get pre-shredded cheese! I used a combination of white cheddar, yellow cheddar, and Boursin Garlic and chive (the ultimate melting cheese!)

I also added a secret ingredient here to amp up the decadence level and it is....whole grain mustard! Tangy and savory, it's a great addition to the soup that adds tons of flavor.

When it comes to this beer and cheese soup with potatoes, think of a loaded baked potato and that's how we want to top it!

The sky is the limit when topping this soup but I keep it simple with some torn-up soft pretzels put under the broiler for a bit to crisp them up!

What to Serve with Beer & Cheese Potato Soup?

PRETZELS were the only option here. I bought a bag of frozen pretzels from Trader Joes and they were a huge hit.

Pretzels are what you would traditionally dip in beer cheese so to me it just made sense. I also have a fun recipe for Chili Onion Crunch Pretzel Knots that would be amazing with these.

Or a slice of crusty garlic bread would be just perfect. I also topped these bowls with some fresh sliced green onion and more cheese for that ultimate cheese pull moment. 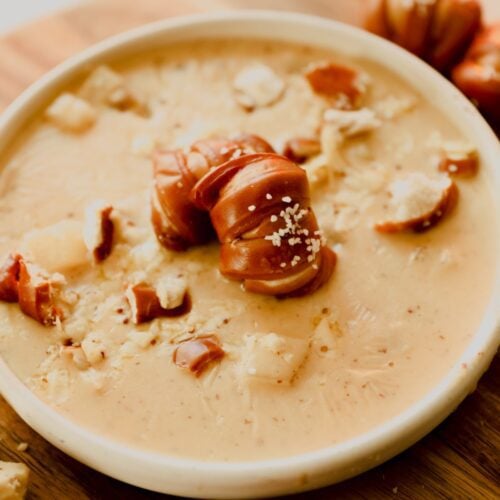