Have you heard of Za'atar? Something about this warm yet bright Middle Eastern blend of spices and herbs just makes anything taste absolutely delicious! For a gorgeous fall salad we are mixing it up with this Za'atar Roasted Golden Beet Salad with Goat Cheese.

What is in Za'atar?

Like I mentioned before, it is a Middle Eastern mix of spices and herbs that contains sumac, roasted thyme, oregano, sesame, salt, pepper, and marjoram.

It also greatly depends on what part of the Middle East because everywhere does it a little different! However the blend is traditionally baked onto pita or I love it in salads!

If you want to try your hand at making your own Za'atar, check out this Homemade Lebanese Zaatar recipe!

If there is actually one vegetable I dislike, its beets. However to me golden beets taste a lot better than red beets. Maybe this is in my head but I find it to be true.

They add great texture to any salad when roasted and by adding this tangy yet herbaceous blend, we take them over the top.

Toss the diced beets in some olive oil along with a few tablespoons of Za'atar and toss them in the oven or air fryer. Great on their own or made into this Roasted Za'atar Golden Beet salad.

What Else Goes With Za'atar Spice Blend

Like I mention above, Za'atar is a lot of times spread over pita and baked into a delicious dish called Mana'eesh. My friend Rania has an amazing recipe for this!

You could also crisp up this baked pita and sprinkle it over a fattoush salad. So good! 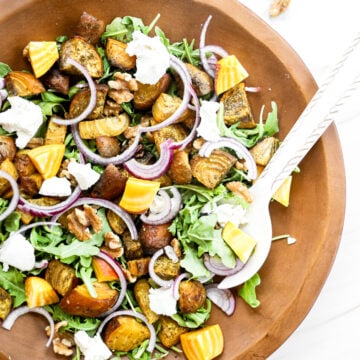